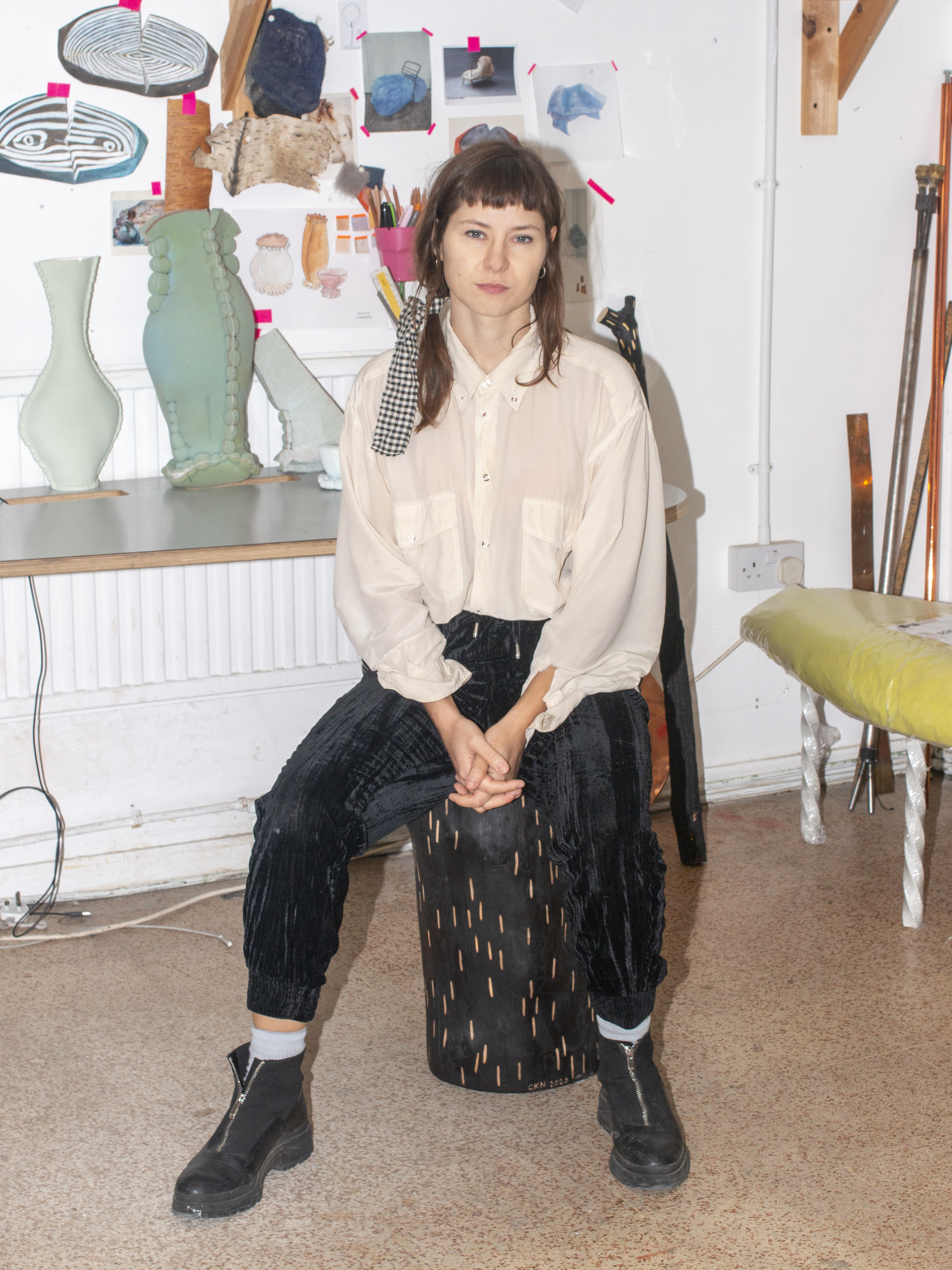 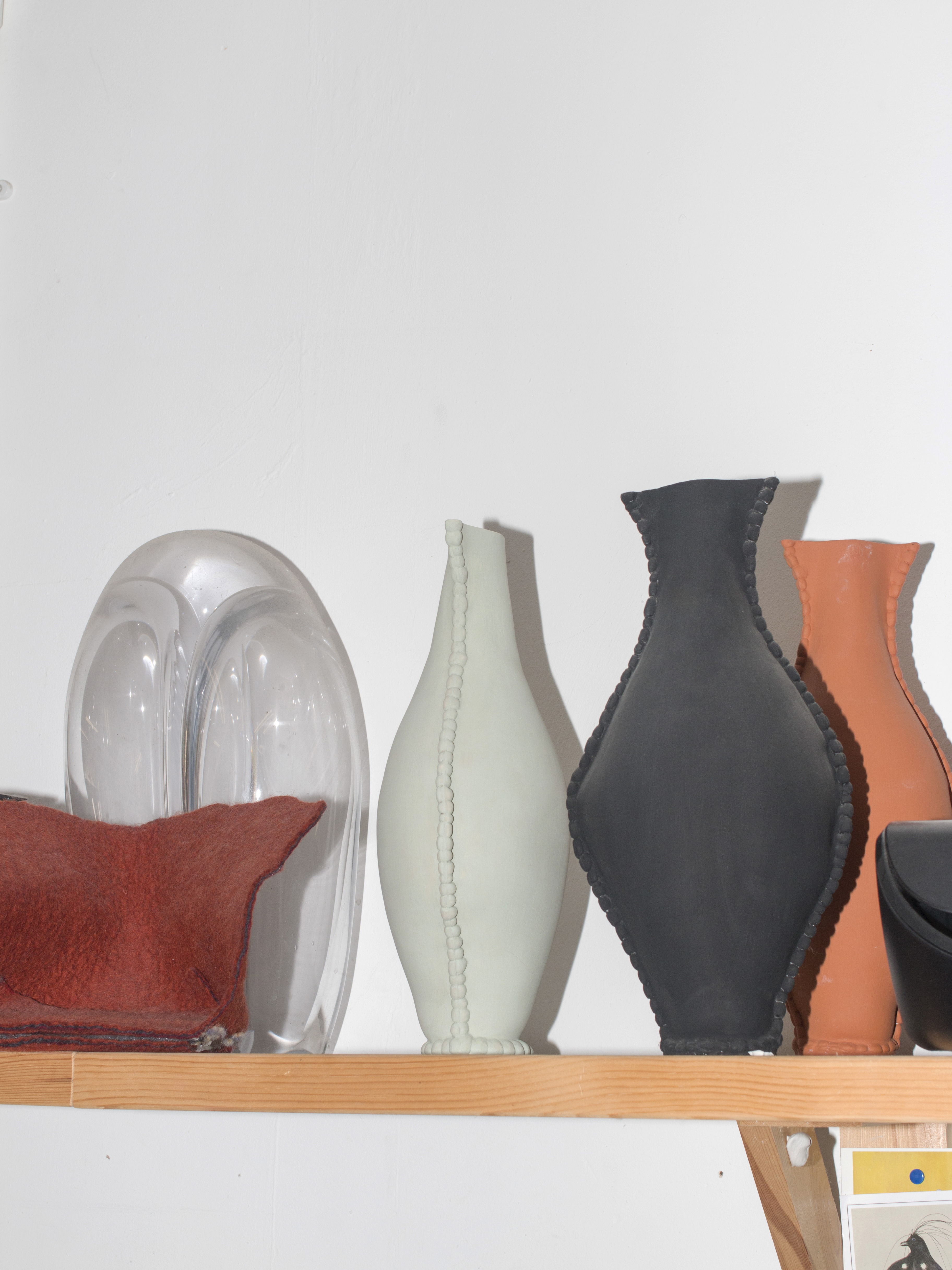 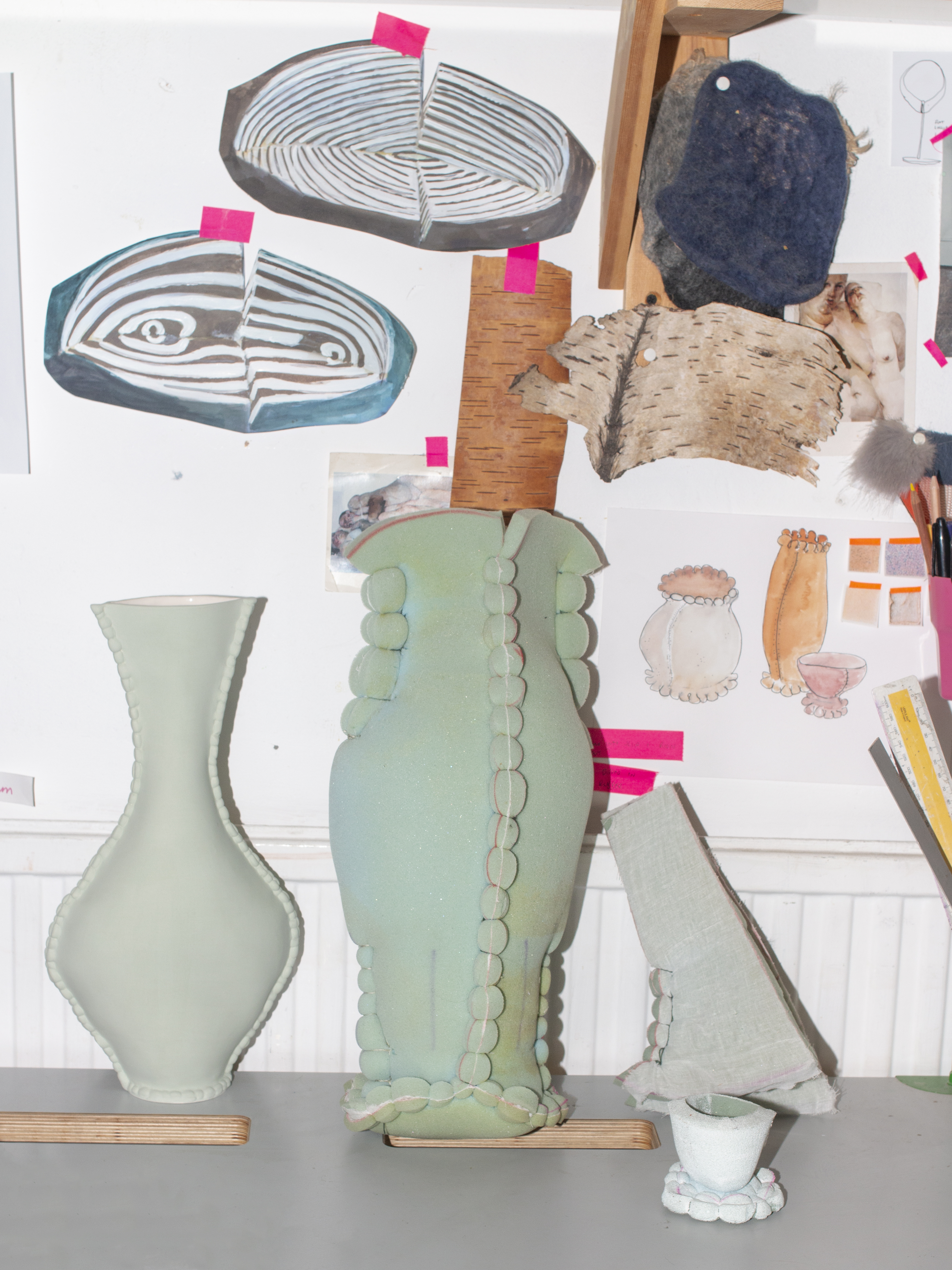 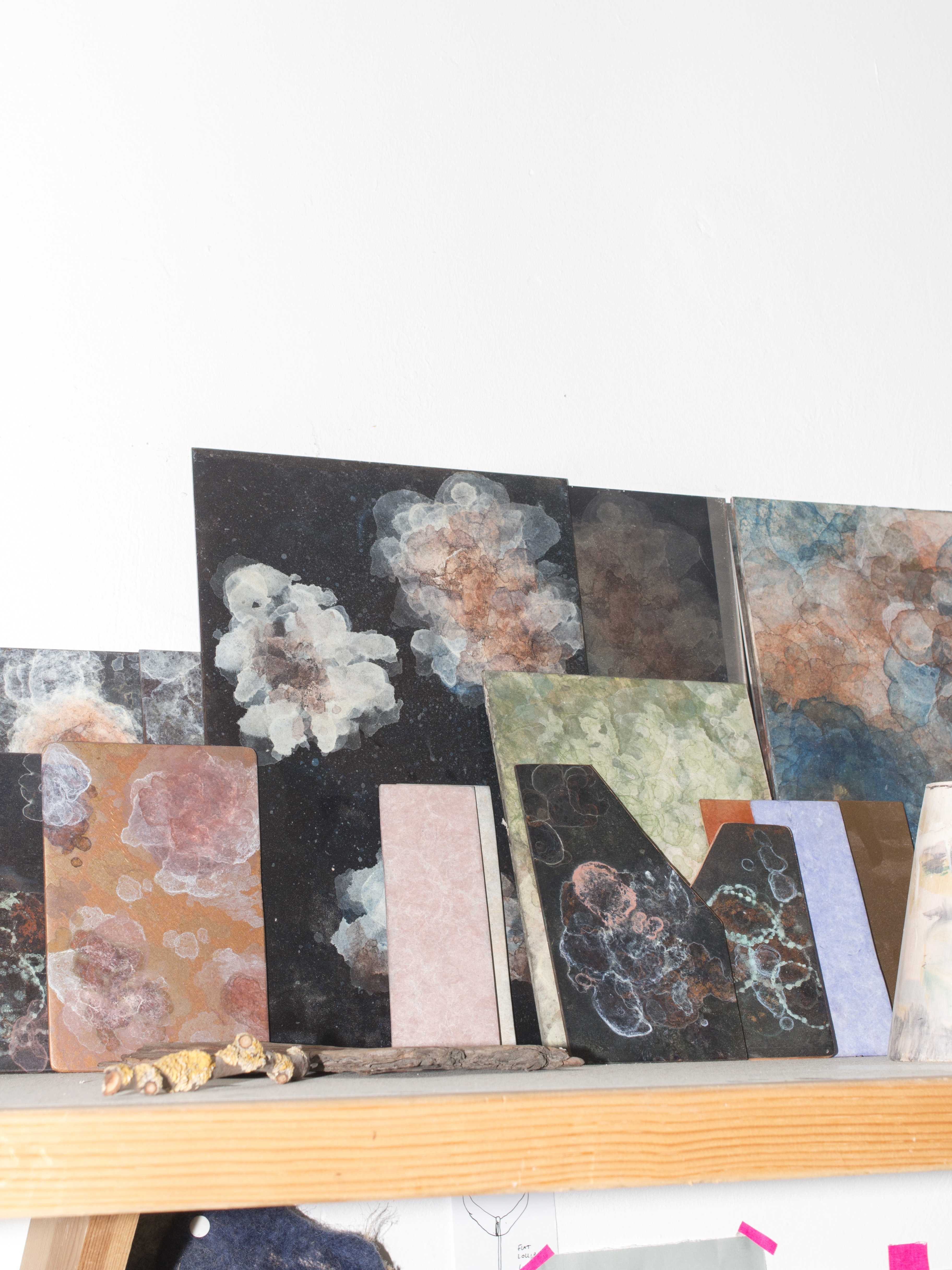 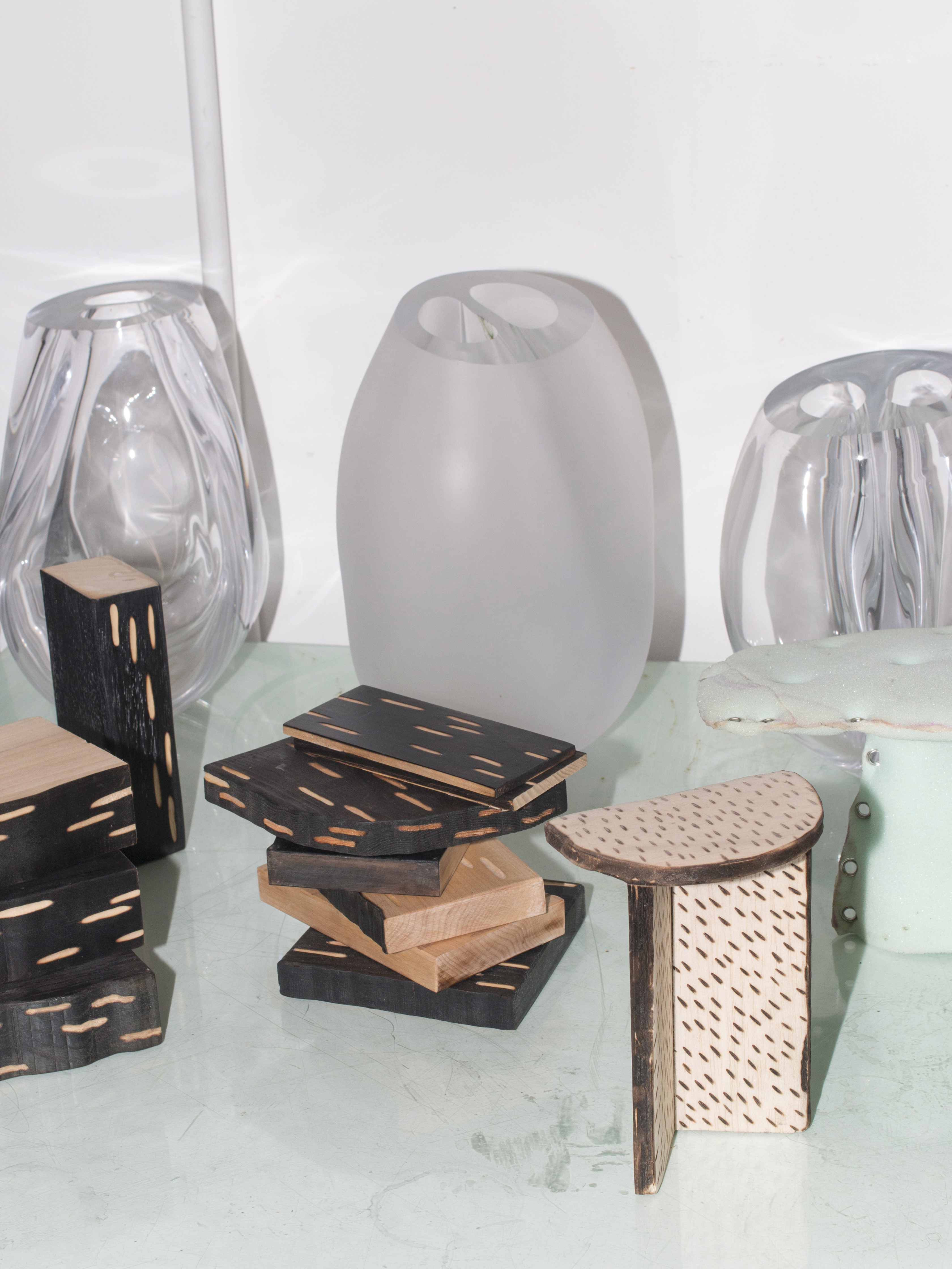 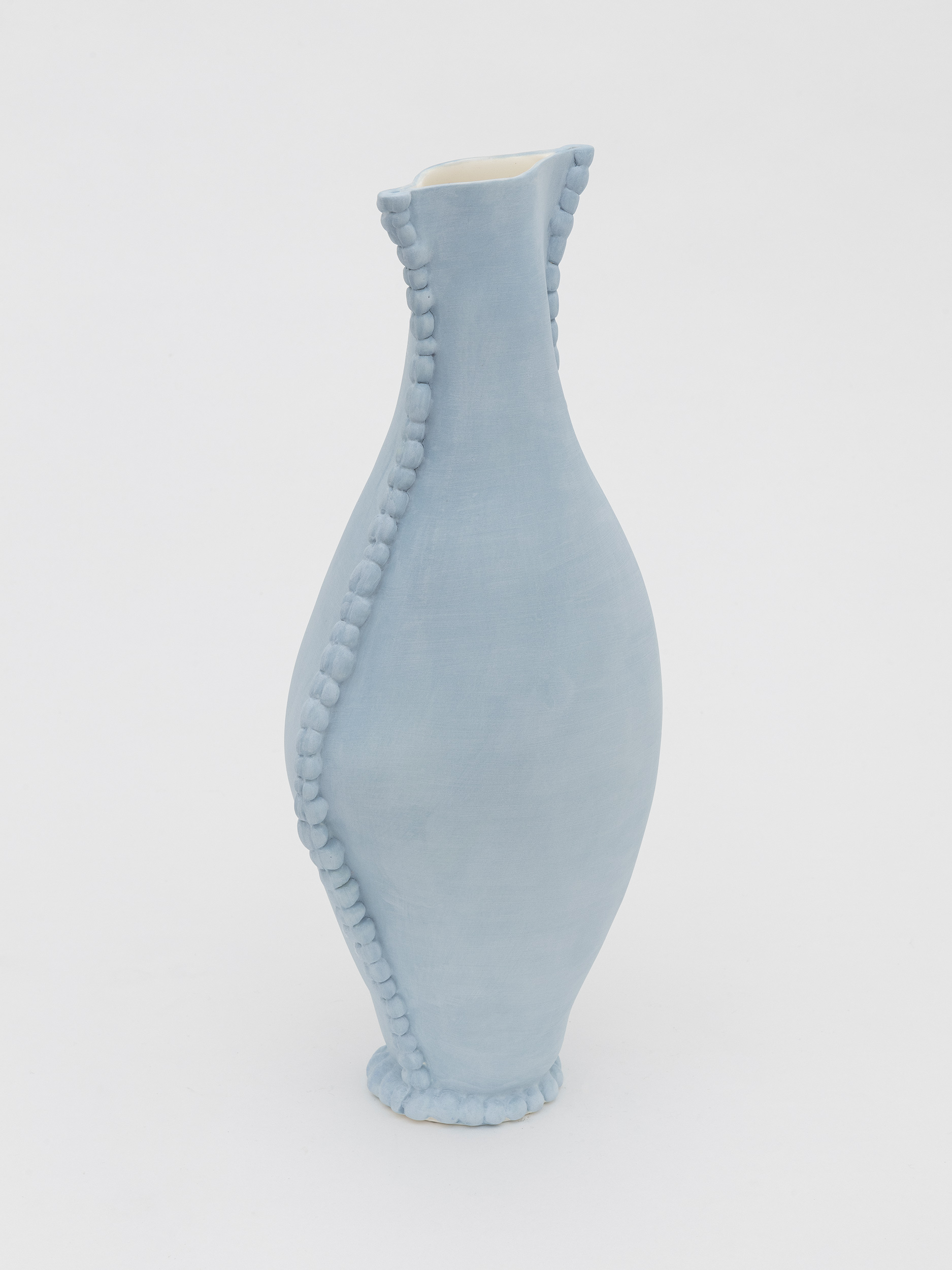 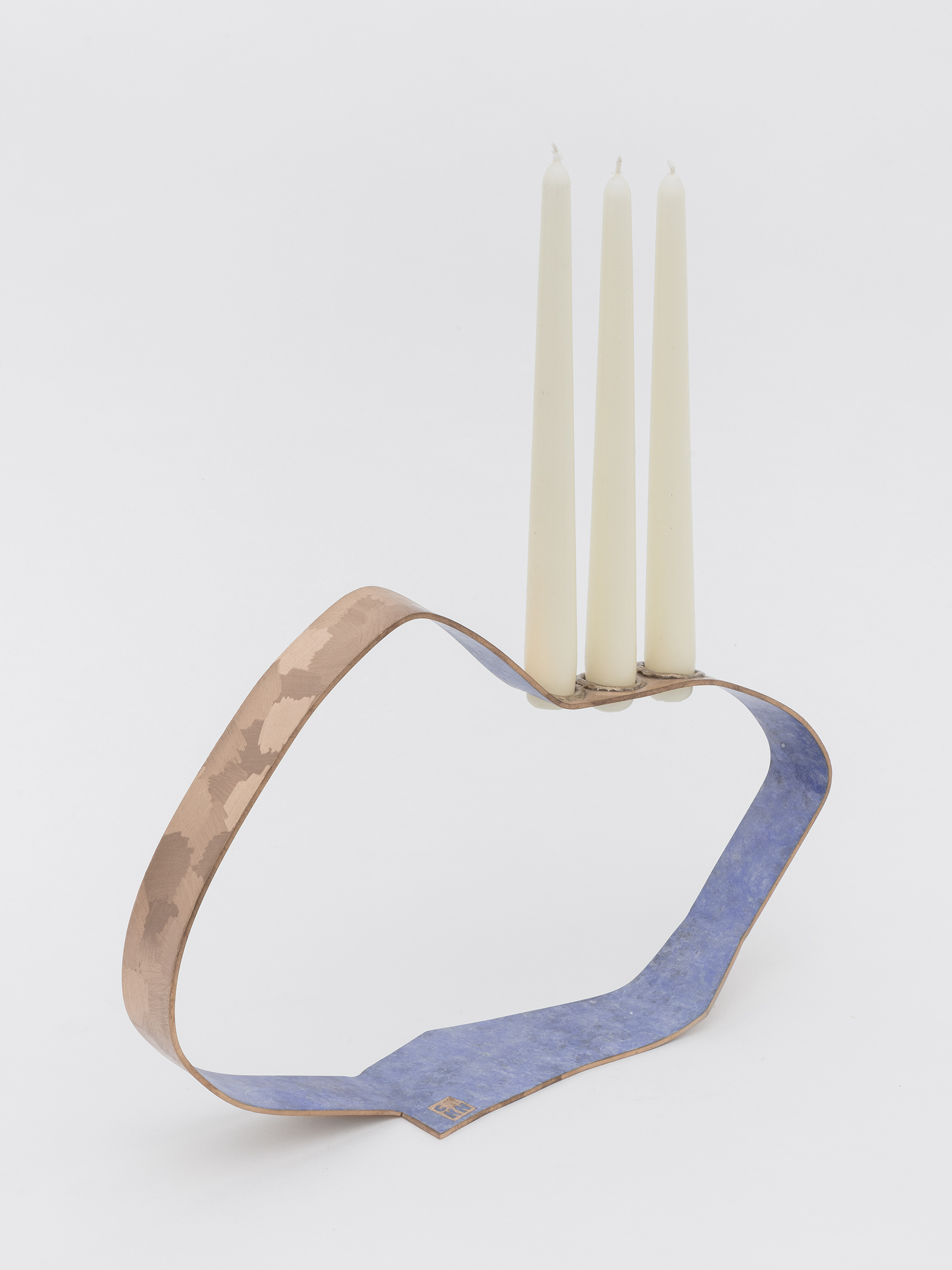 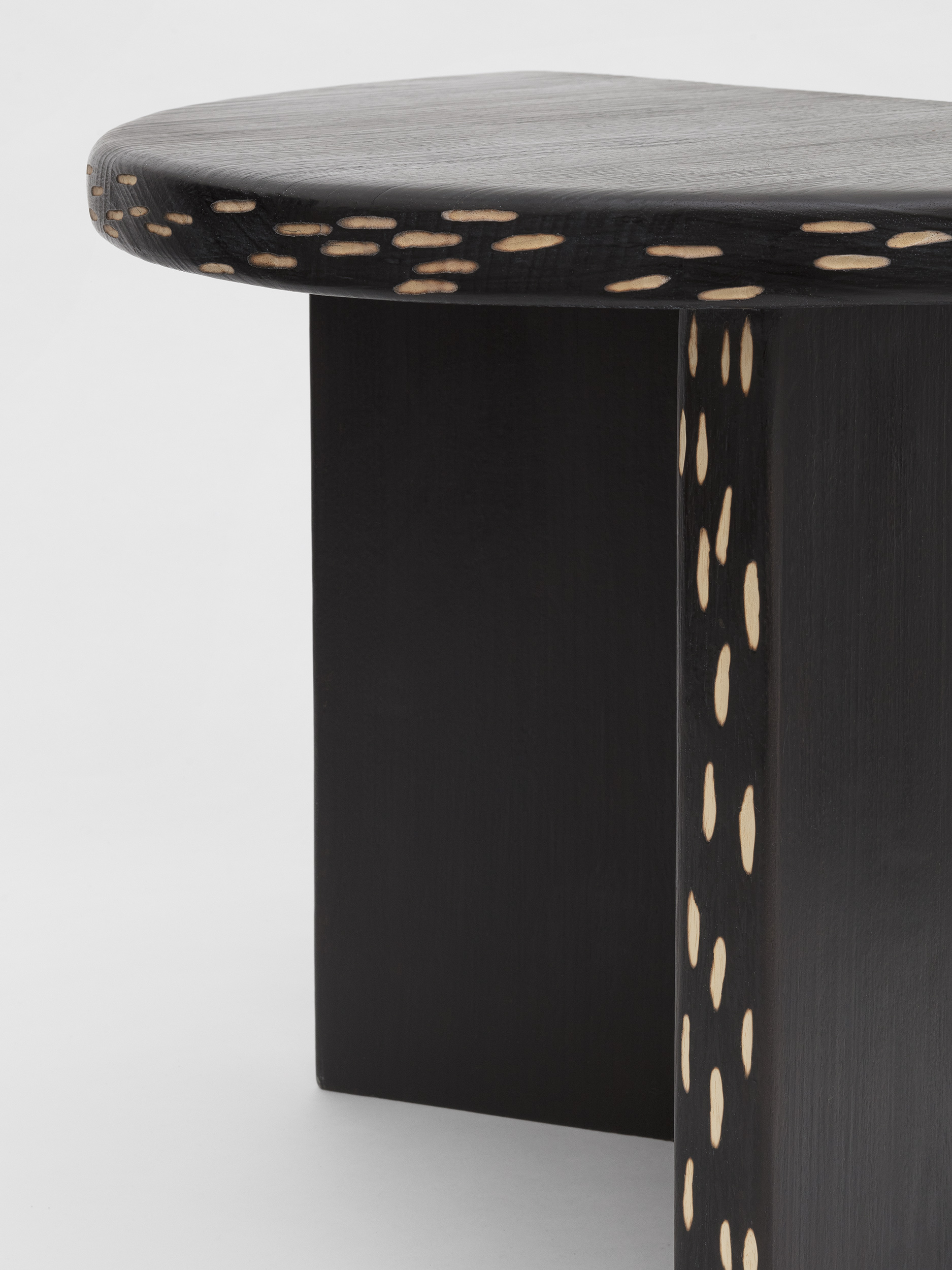 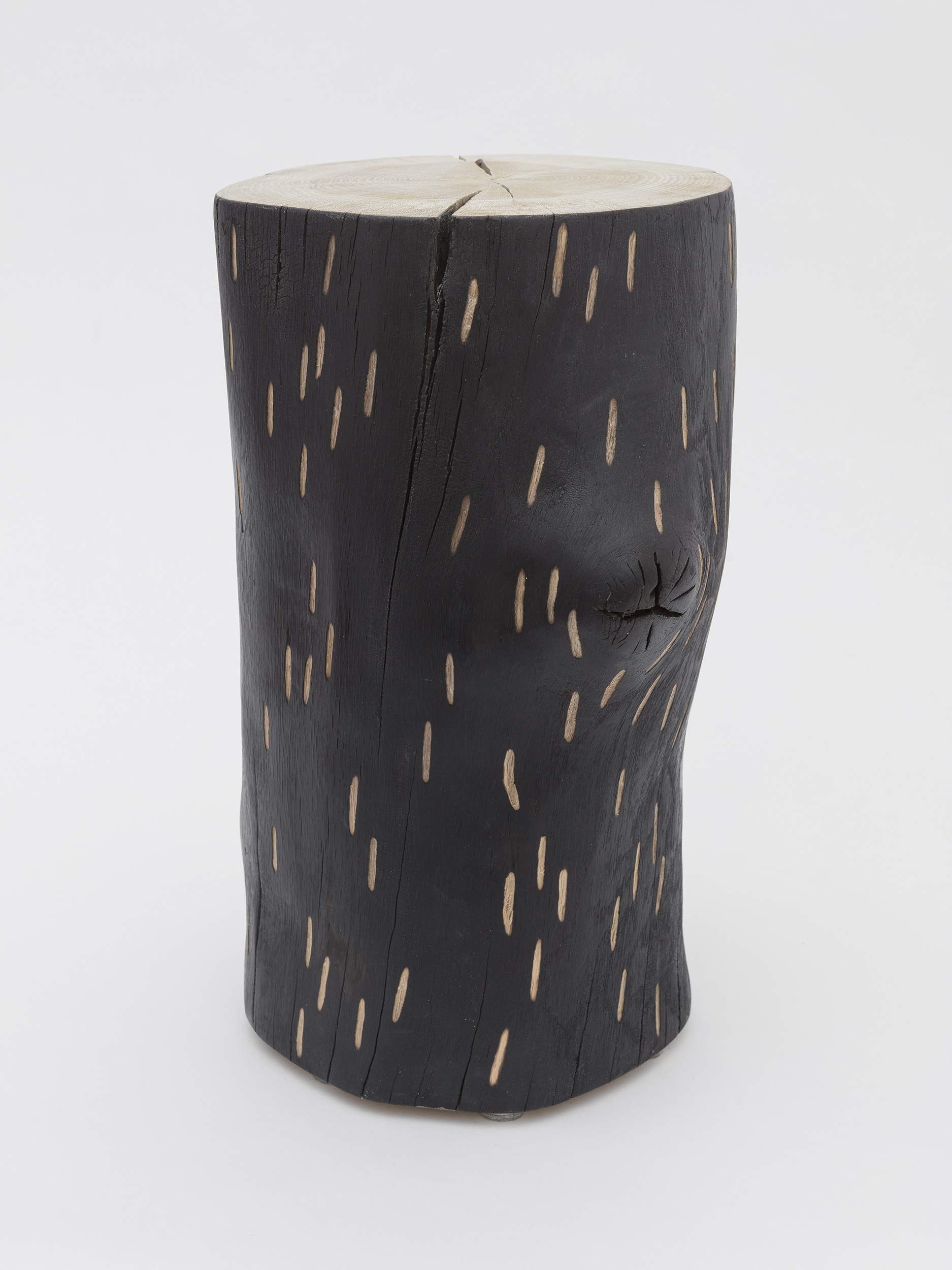 Can you describe your work in three words?
Cross-pollinating typologies.

What got you into the arts? How did you become a designer?
I think it's very much part of who I am and the way I see things. I come from a creative family. Both my parents are photographers and growing up, I used to mess around in the dark room that was in the basement of our house. Maybe it was a small rebellion for me to move into 3D objects. I enjoyed tinkering with the tools in my dad’s shed. Me and my brother would make skate ramps and crappy tree houses. When I got to secondary school, I got into messing around in the art department, melting plastic, rusting metal and seeing how much I could affect different materials. I carried on with this at Art Foundation at Kingston University, which was such a freeing and exciting year. I went on to study Furniture and Product Design at Buckinghamshire University where I came up with some design concepts that I still make now. Several years later, I followed on with a Master’s Degree at the Royal College of Art on the Design Product course. But I knew from the age of 15 that I wanted to have a design studio.

What was the first object you ever designed?
When I was about 15, I made a large metal vase about a metre tall that I think was inspired by one of my father’s photographs of a high-rise office block. I had a sheet of steel that I wanted to fold into a rectangular vessel. I remember my teacher saying we couldn’t bend it at school so I wheeled it on a skateboard to this small metal workshop nearby and convinced them to help me (a useful skill to learn at that age). I riveted it together and drilled loads of circles out of it. I made a green PVC rectangular sleeve to fit inside and blowtorched it until the plastic melted out of the metal holes like bubble. I think my mum still has it in her garden.

Your creations often subvert and dismantle the identity of objects. Can you tell us more about your practice?
I like to cut through traditional craft techniques and hack into industrial processes as a type of art form. I'm interested in the deconstruction of archetypes, dismantling the identity of an object and cross-pollinating typologies and methods of making. I like to carve a character from the materials I work with and engrain a sense of permanency. It's that conflict between functionality and aesthetics in design that fascinates me most.

What are the things that inspire you most when creating?
There is a level of indeterminacy within my work… it’s uninteresting for me to know the exact outcome before I have got there and I like there to be space for discoveries. I am interested by peoples’ connection to objects, both psychologically and physically, and this feeds back into the works I produce. I like seeing people interact with the objects I make. My intuition plays heavily in the making process, what feels right or wrong, the sense of space around it... it’s often quite a sculptural process. I’m interested in discovering new processes and types of manufacture, either through visiting factories and workshops or even deep searches on Youtube.

One of your most recent designs, the Babafelt chair, is a development from a previous model that was commissioned by the Bill and Melinda Gates Foundation in Seattle in 2011. Can you tell us more about the story behind this piece?
I designed the first version of this chair while studying at Buckinghamshire University, when I was exploring the idea of making a volume of space out of a flat sheet of material. I started cutting and folding felt and developed a folding technique which became the base of the chair. I liked the idea that it was a luxurious industrial chair made from thick merino wool felt, which has associations with hand-made traditional craft, yet using industrially-made merino felt, which is normally used for more industrial applications such as softeners in machines or polishing. A few years later while I was in my first year at the RCA, I was contacted by the Bill and Melinda Gates Foundation’s design team, who wanted four of my felt chairs for their new ecologically designed headquarters in Seattle. I remember it being quite tough to develop the design and make these on the side of trying to fulfil my briefs on the course! Several years later I revisited the project and worked with steam bending to make a thick walnut timber frame to replace the metal frame I used previously.

You work predominantly with tactile materials, such as merino felt, wood, bronze and ceramic. What do you hope such materials convey when used in furniture and design objects?
I think all materials are tactile but I’m particularly drawn to more malleable materials. Foam and upholstery is something I keep coming back to and still excites me. I visited a foam factory in Manchester some years back and was mesmerised by the process; the liquid foam bubbling out and rising into giant blocks of bubble gum colours and textures, going down a long conveyer belt and then chopped at the end. With the felt I was super interested in the ways it was made and I explored the various techniques from the arduous hand felting with soap and steam and leg work, to machine needle felting with a giant machine press. I think soft malleable materials represent something human to me and I like mixing these with more rigid materials to explore that relationship between subject and object. Using tactile materials also brings a human element to things, a feeling of wanting to be touched and loved, as well as a sense of comfort.

Who are the designers and artists that have inspired you most?
If you can call them artists then plastic surgeons! I went through an unsettling stage of being obsessed with watching types of plastic surgery on TV. I found it fascinating to watch them build up and transform body shapes like a type of sculpture. Also Jenny Saville for her fleshy paintings, Sarah Lucas for the fun and human aspects she brings into inanimate objects, Rachel Whiteread for her original use of materials and exploration of space and Ray and Charles Eames for being the wizards of biomorphic design. Also, Jessi Reeves – I resonate with her use of pre-existing objects in her work and I think we share similar lines of interest but with totally different outcomes.

What interested you about joining Canopy Collections?
It is rare that a gallery unites design and art in one space and I like this aspect. I am also an advocate for living with art you love and filling your home with objects that give you joy and I think this is the message that Canopy Collections celebrates.

Do you collect from other artists and designers? How important is it for you to live with art?
Yes I’ve started a small collection and hope to grow it once we have more space. I sometimes swap my work with designers and artists I love. I have a slight chair addiction too, with a penchant for different styles of steam-bent Thonet chairs.