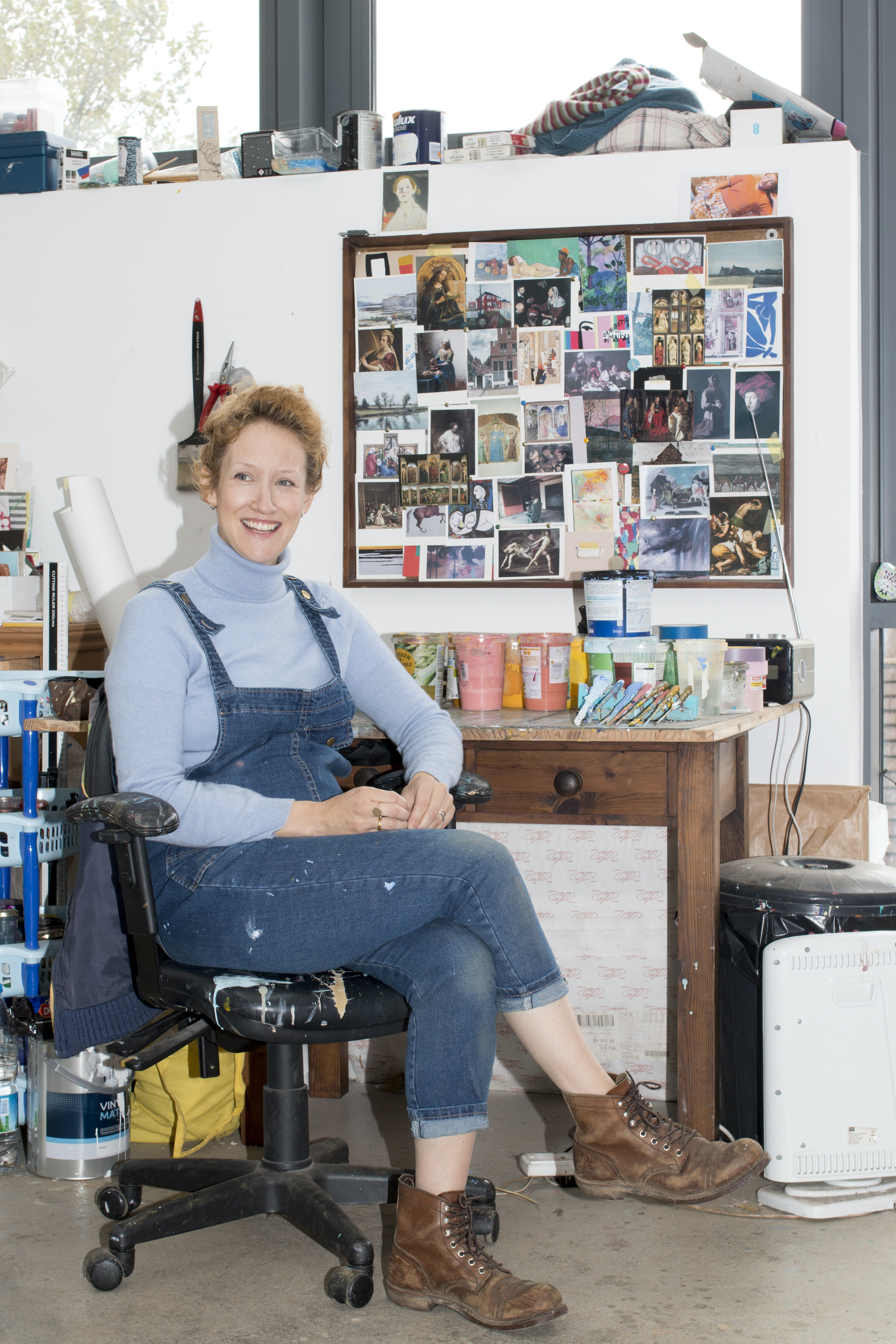 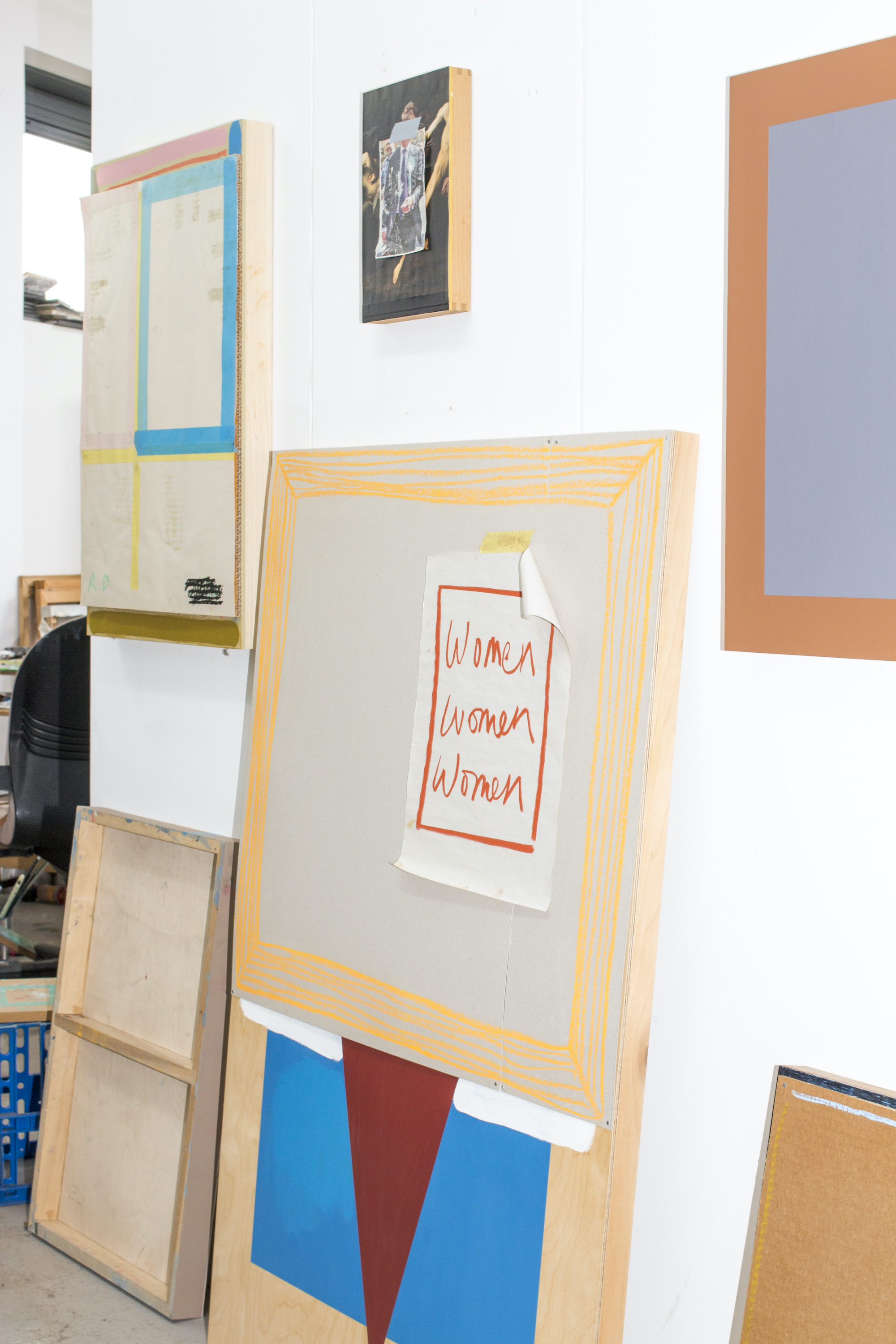 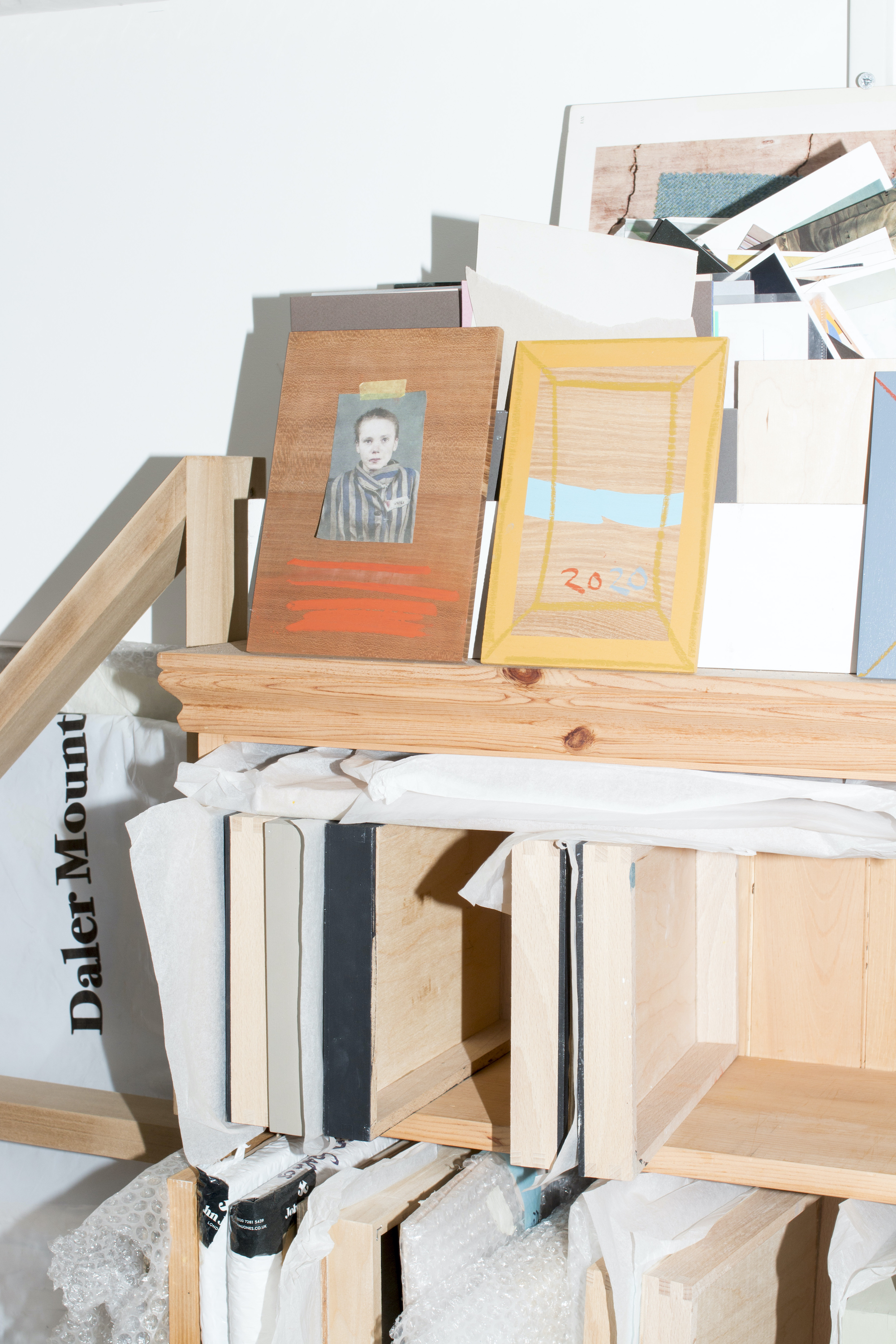 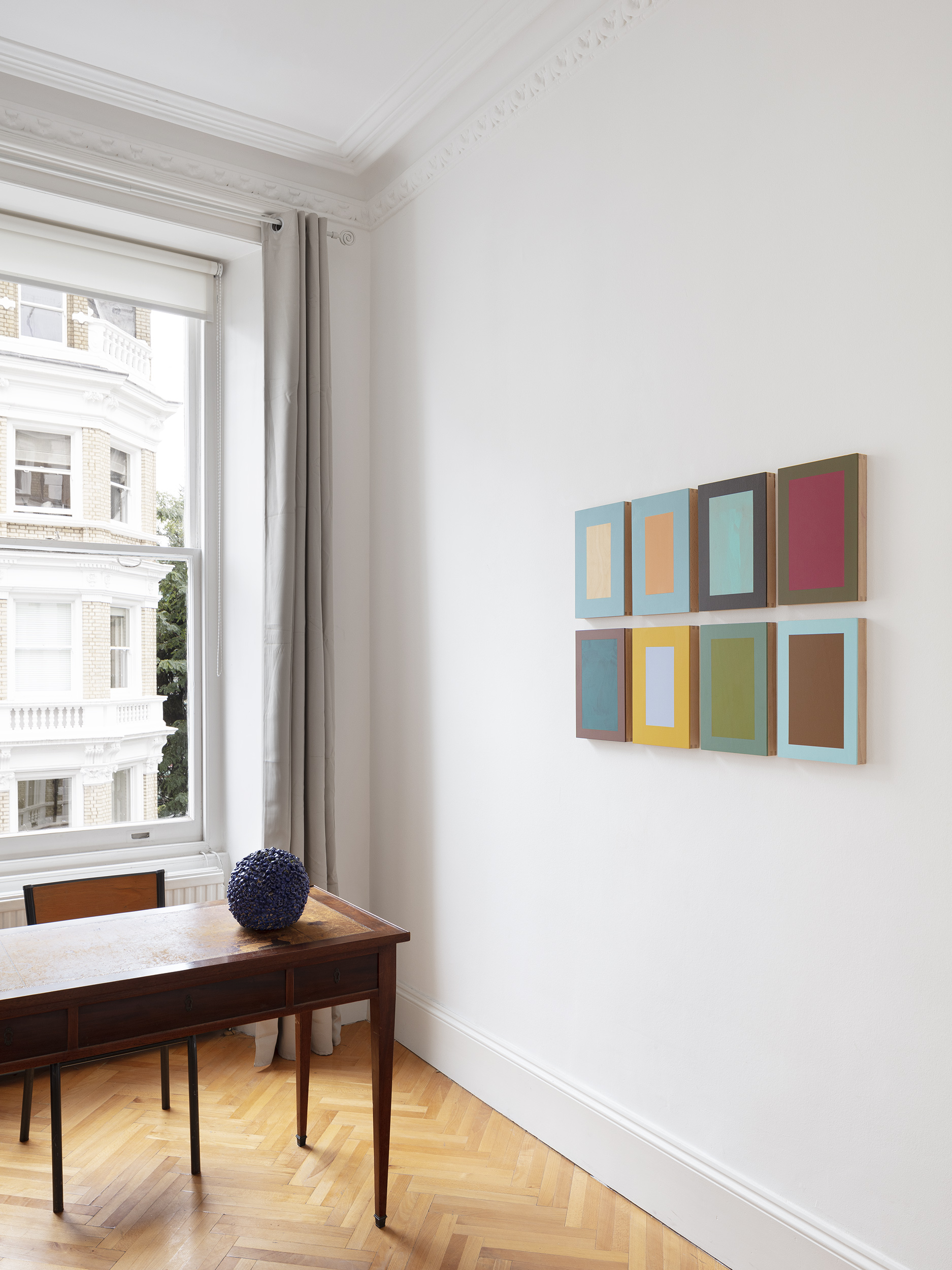 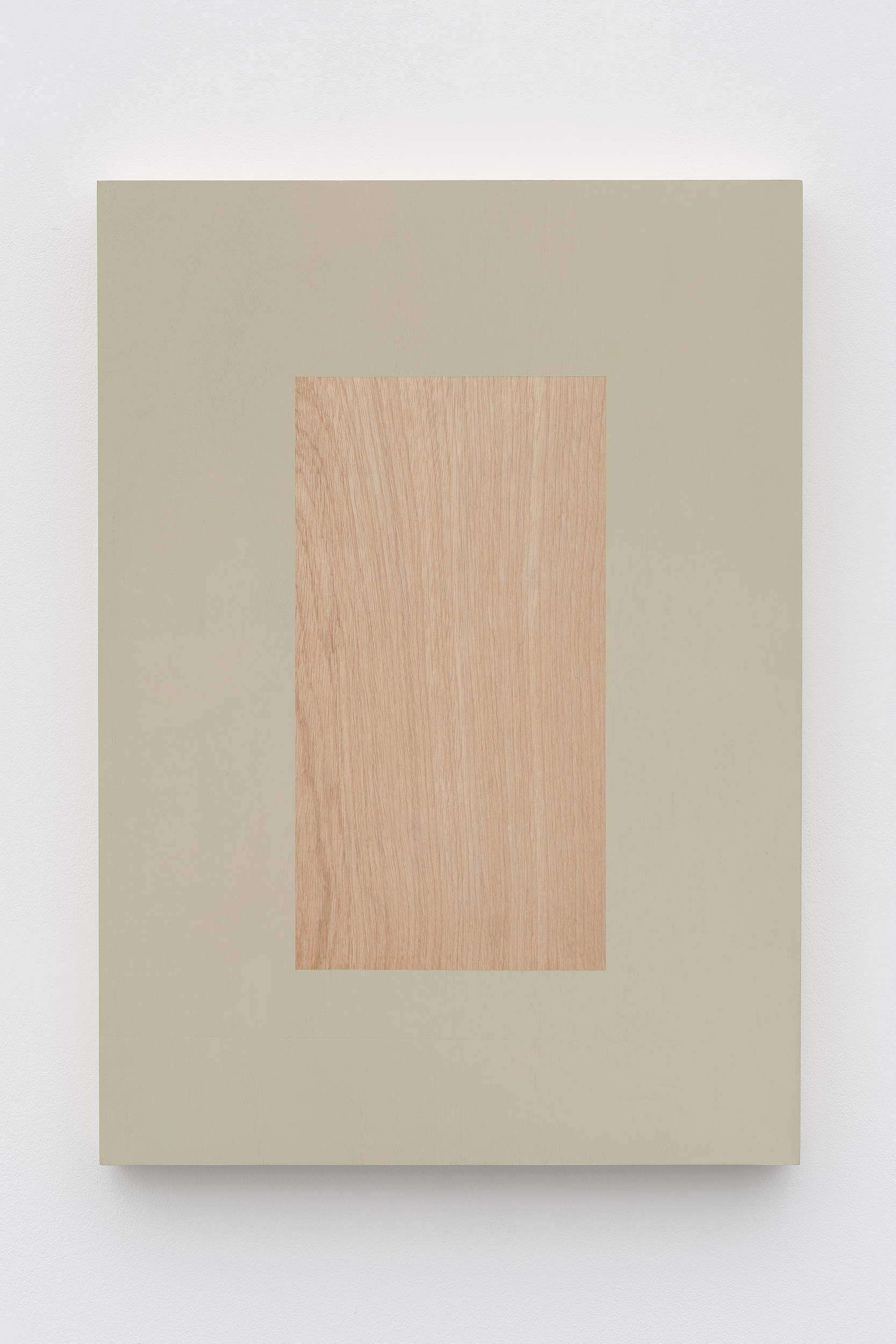 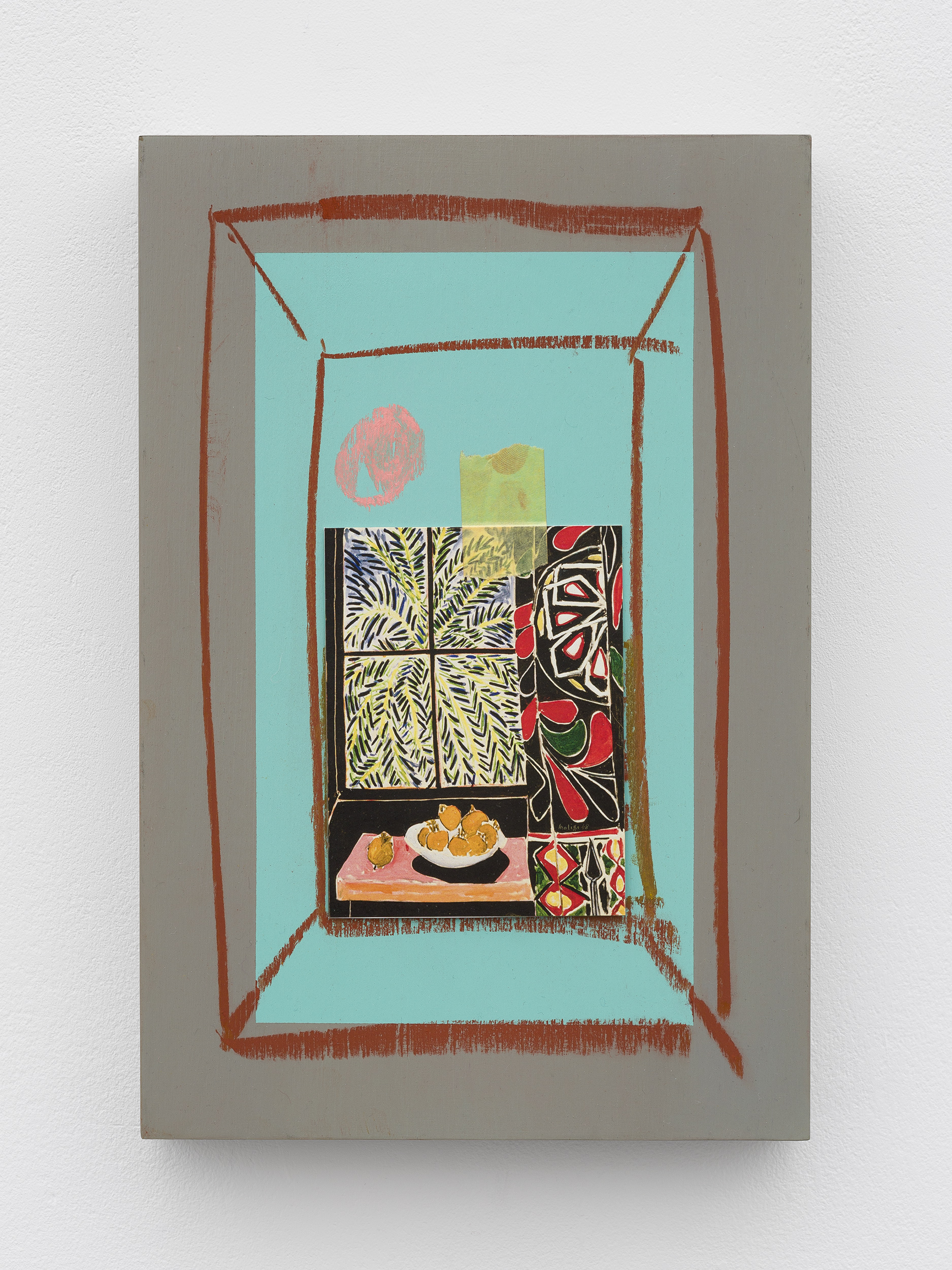 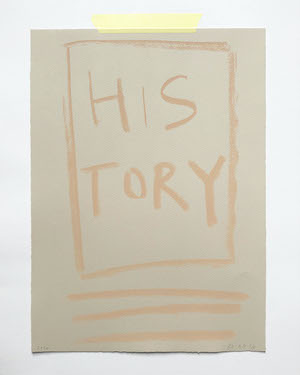 Can you describe your work in three words?
Colour, frame, space.

What got you into the arts? How did you become an artist?
I always had an interest in art, or perhaps it is more accurate to say art was always around me since both my parents taught art and were artists. As a child, I remember very vividly my dad taking me to the National Gallery in London and whispering in my ears about the paintings. At the time I found this annoying but I now realise it was a gift. Later on, I moved to Edinburgh to study Art History at the University, and Fine Art (Painting) at the Edinburgh College of Art. In 2010, I completed an MFA in Painting at the Slade School of Fine Art in London. There’s something about the medium of painting that I always found fascinating: the flatness of the support, the endless combinations of colours…

Can you tell us more about the rectangle and frame as reoccurring motif within your paintings?
I remember quite clearly the moment that the rectangle as a solution came to me. Fifteen years ago, I was making paintings from photographs of architecture that were already flat in colour, with a crisp light. One day, I realised that the subject matter, the architecture, was actually very separate from the object of the surface, that they were in fact illustrations of buildings. The question then became: what would be the most logical thing to do with a rectangle, with those panels I was painting on? The idea that came to my mind was to trace the shape of it, to simply mimic it, and to leave the wood bare. As an artist, I believe that the simplest solutions are often the best, but they are also the most intimidating. The work then felt much more genuine and more of a personal investigation, rather than a replica of something I had seen.

How do you choose and mix colours?
When I started to focus on the rectangle as a motif, I often made paintings where the grain of the birch plywood, or whatever wood I was working on, was exposed. The colour would often relate to that and be very close in tone to the wood. Then colour became more intuitive, often inspired by the conditions of light within the sky. I don’t want to use colours that seem permanent, they have to feel as if they could change in an instant. A classic example is this time of the day when the sun is setting and the sky is continually changing. Those colours aren’t tangible and they’re often very soft and close in tone — pinks and blues that painters have always tried to capture.

Are the colours you use influenced by specific things around you?
The best colour I ever made was a blue, I still have the pot, from 10 years ago. It was the end of the day, I was in my studio, looking at the sky and I saw that blue that only exists when you have an electric light on inside, and it’s getting dark outside. It’s not even a real colour, it’s an interpretation of light that I made into something solid. I don’t think I’ll ever be able to reproduce this particular colour. Sometimes, colours appear without me being aware of them. For two years, I used a very specific pink, over and over again, until I realised it was the same pink as one of my handbags! It was just in the corner of my eye and it inspired me when I wasn’t even paying attention. Since then, I’ve decided not to be too specific about where my colours come from, because my explanation won’t probably be true. I think the reality is that they’re already in my eyeline and simply feed into the work.

When did you start making collage works? Are they a direct development from the paintings?
The collage works started around 2015, because I had started to mess around with a pad of coloured paper I had. I remember encountering this really beautiful blue paper, which I haven’t actually managed to find since, and using a yellow masking tape. I just cut a blue piece of card out with some scissors, and stuck it on top of a wooden panel. The yellow went really beautifully over the blue, it was probably made within a matter of minutes but it resolved a lot of things in my pursuit for colours. I felt like I had discovered another way to work, breaking out of the more rigid way I’d been painting and laboriously mixing colours. That’s how collage became this other avenue that would introduce a spontaneity to the work, yet still felt natural. I collect a lot of postcards from exhibitions, which become in turn collage material. I’m quite interested in the idea of taking an image away from a gallery, and then using it again within another image.

Who are the artists that have inspired you most?
Piero della Francesca, van Eyck, Vermeer, Rembrandt, Caravaggio, Egon Schiele, as well as artists like Henri Matisse, Agnes Martin and Bob Law. People often think I look at artists like Josef Albers or Marc Rothko — those were fantastic painters obviously but the artists I’m drawn to are often the Old Masters. Paolo Uccello, for example, used colour in such an incredible way. When I look at Renaissance paintings, it’s always the formal elements that really get me excited, the way these artists organised colour, shape, light, space and form within the frame.

What interested you about joining Canopy Collections?
I was really intrigued by the concept because, back in 2011, myself and two fellow artists organised a show in the house I used to live in. We invited 10 artists to present their work and to our amazement, we sold a lot of works. When people see art in a house, it suddenly clicks, they realise that they can live with it and that art can easily cohabit with whatever already is in their home. When I heard about the way Canopy Collections was presenting art in domestic environments and the other artists that were involved, I was really excited to be a part of it. Buying art is quite a commitment. We change, people change, but the artworks remain and eventually, they can live forever. I think Canopy Collections makes collecting and starting a collection a very exciting and accessible process. It also gives people the confidence to choose work that they would like to live alongside.

Do you collect art from other artists? How important is it for you to live with art?
I definitely collect art from other artists. In fact, most of the works I have at home were made by artists I personally know. I often swap artworks with friends, and sometimes buy from degree shows. I absolutely love living with art, it makes me happy and cheers me up! I grew up in a home that was littered with art, floor to ceiling in some rooms, with paintings and pictures everywhere. There is so much pleasure in placing art within your home, and the practice of collecting is really fun: it can be completely random and doesn’t have to be expensive.